Lilah is a beast behind the wheel. She’s four. But that girl can maneuver a three point turn, looks back to navigate when she’s in reverse, and enforces the helmet rule. But she’s been driving around her five year old brother for over a year, and it’s now his turn to put the pedal to the metal.

Since we moved to the farm a month ago, that little red Chevrolet Silverado has had some off road miles put on it. I stuck Kenny in the driver seat about two weeks ago, and walk around behind him as he learns to keep the pedal down. He hasn’t paired the steering wheel with it yet, and I’m not sure if it’s the apraxia or what that is making that difficult. But it doesn’t really matter. He held the pedal down, and it was amazing.

We’re painting our house this week, and I’m not sure whose brilliant idea that was. But my husband and I are at our best when we’re immersed in a project side by side, so it has been a positive experience. I decided to let Kenny try out the little red truck while I painted a bit, and figured what could possibly go wrong, if I pointed the wheels straight forward, on the driveway, with nothing but grass on either side.

Yikes. I’m still not sure how it all happened, but all I know is I had to go full on linebacker mode, putting my shoulder into that grill, as I reached up and over to turn the key off. Pretty sure Kenny’s foot was still on the pedal full force, as I was yelling Stop! Stop! Stop! 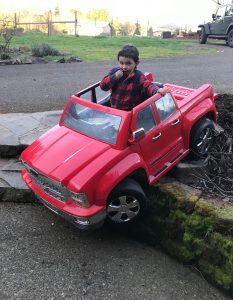 I couldn’t help but snap a pic after he was “safe.” Who wouldn’t?! Look at that face! I sent it to my friend, and her response was… zoom in on his face, then slowly zoom out. She was right, it made the scene all the better.

I think I convinced my husband to sell the little Chevy, and the CRF50 dirtbike, to buy a little tiny side by side instead. Lilah has become quite the little driver, and Kenny sure loves offroading! I think it’s a safer choice than anyone on two wheels. Four wheels is scary enough.

One Reply to “Just hanging out”