I had planned on waiting 6-12 months before getting any livestock. I was greatly outnumbered when it came to having animals for meat, everyone in the family only wanted pets. Now I’m a practical and *aghem* financially efficient person (my husband lovingly refers to me as cheapo) so any animal brought on this property is going to need to give more than it takes. We’ve had a lot of dogs and cats over the years, most recently a Great Pyrenees-Labrador puppy that I tried to train very well, that ended up being rehomed to a lovely veterinary technician who was looking for his personality and size. He was rehomed because in order to get an autism service dog from the company we’re working with, there can be no other dogs in the home. But I learned a lot with Goose the Pyrador- that animals can be a lot of work, and I already have enough packed into my days, nights, weeks… so whatever animal brought on this property needs to contribute. A lot.

My dear friend Andrea owns a working ranch, and she gave us two baby sheep on a lease to own option. If I decide they’re just too much work for any reason at all, I can give them back with no questions asked. She’s the best. My husband was looking at purchasing goats, so I beat him to it with the sheep that came with a backup plan. Moms are always trying to stay 18 steps ahead. 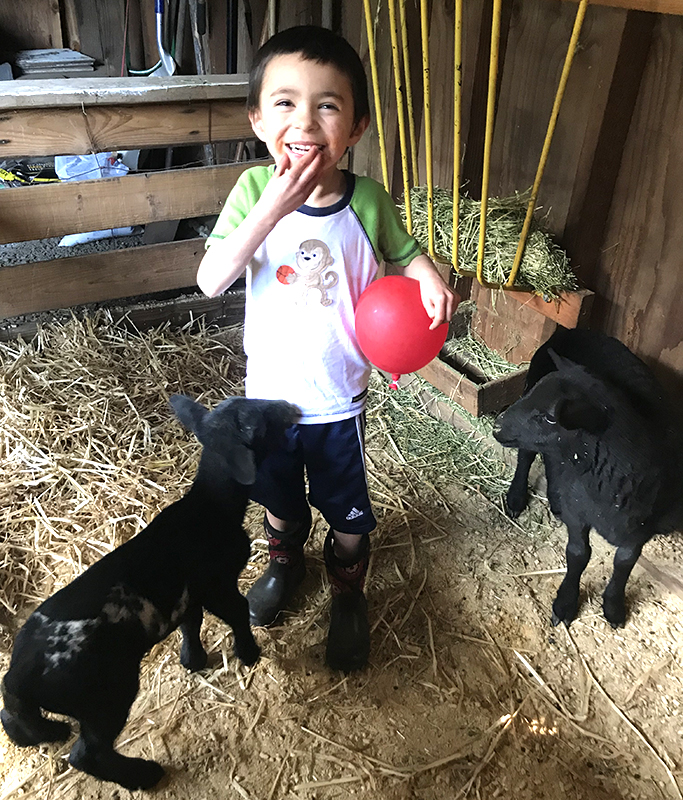 These sheep have been the easiest animals I’ve ever had. Sure, bottle feeding them is going to get old, but it only lasts a few months, then they’re out doing me a favor, keeping the grass mowed. Plus they’ve already become acclimated to the kids after two days, and they are gentle creatures. Any living, moving, unpredictable being around an autistic human is going to be more openly welcomed if they aren’t kicking, jumping, or biting. It’s a win-win.

Kenny, our five year old autistic, nonverbal son, has enjoyed meeting the chickens and sheep. He hasn’t been interested in feeding them like the other children who have come over to see the animals. But that’s fine. I respect his need for repeated exposure before participation. I know he will come around. I just don’t know when.

Kenny is a complex individual. His tiny 29 pound frame is scrappy and I have compared brushing his teeth to grappling with Conor McGregor. We love each other fiercely, and he has high affections for numerous individuals. But they all have learned to treat him with respect. Kenny can sniff out an agenda a mile away, and will immediately put up his hand in protest. We’ve tried to teach him healthy ways to reject an activity, but that ones that have stuck are the hand straight out, and his modified sign language for ‘stop.’ If you don’t listen, you will get a quick smack. We try to listen.

I’m confident Kenny will find his niche with the animals. He already has in the trees. He explores, he picks up treasures to show us, he decorates bumpers of vehicles with his findings. He had his first experience driving the Big Wheels red Chevrolet, after being a passenger for the last year and a half. We worked on simply pressing and holding the gas pedal down, and after awhile, he did it! He yelled at the top of his lungs “yessss!!!!!” with his arms pointed straight up in the arm, wind in his hair, face to the sky. My husband and I shared in his bliss, so excited for this huge day in his world! We haven’t connected the steering wheel motor plan with it all, but just the fact that he is driving on his own is huge! We are so excited for him! This is an experience he wasn’t able to have in our previous house, despite the huge cul-de-sac. It just wasn’t safe.

I suspect Kenny has Pathological Demand Avoidance (PDA), since from the day he was born, any idea has had to come with bells and whistles, and still rejected. Feeding was painful for all of us, but we navigated that journey. Teaching him to walk consisted of fastening wind chimes to the wall at his height, a few steps between. Capitalizing on his current interests has been the key to helping Kenny learn new skills. I don’t ever want to have an ableist attitude, but the fact is, I want my son to have as full of a life as he possibly can, with the supports he needs. I know that some day he will dress himself, he will pack his own lunch, and he will have a job. I truly believe that every day between here and there is important. But it’s also important that I take breaks to recharge my own batteries so I can go on this journey with him.

This farm is also for our four year old daughter, Lilah. She has gained so much by being the mother hen, the mother sheep. We want to honor both children’s needs and opportunities for growth, whatever that may be. She’s a fiery little one, packed full of ambition and empathy, and she too deserves this farm life.

I’m pleased with how the last three weeks have gone on the farm. There have been hard times, meltdowns, confusion, and chaos. But the majority of the time has been filled with everyone being honored with the space they need, and fresh air in their lungs. I think I have already gotten used to this farm life.

One Reply to “New Found Freedom”